[Customs] The Street Rod is ready. Are the roads?

It's finally complete! It's spent more time being left alone than being worked on, but I've finished all that's to be done. While things didn't go the way I had hoped, I'm content with what I managed with. 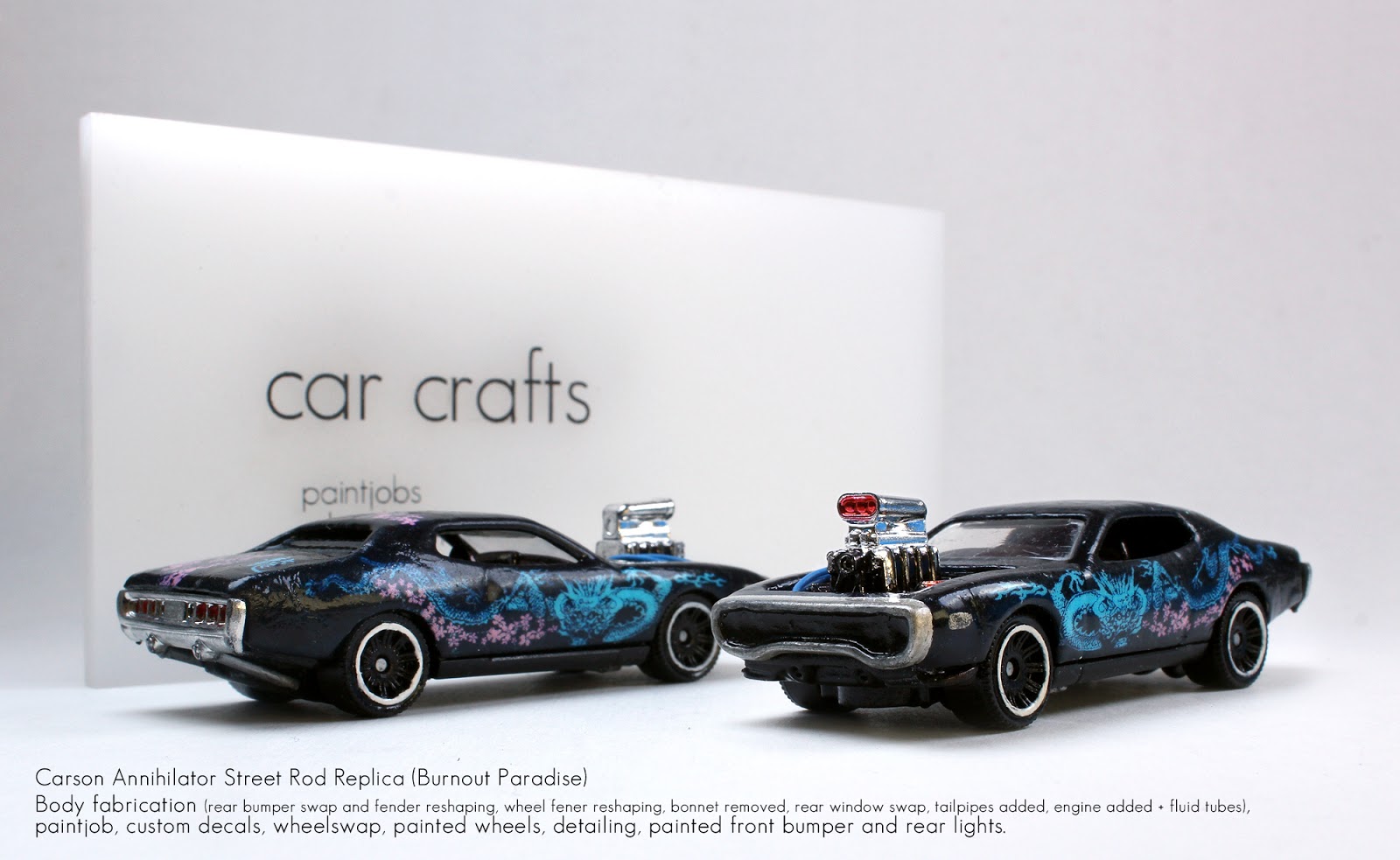 You may skip this entire section and click here to see more photos the finished product, but I wish to explain my work process in hopes there's something you may learn from this.

It started with the having all the materials, but not having an idea of what to do. Decal sheets were available and the polyestor putty had not been used once. It was time I found a project that would involve a higher level of craftsmanship than I'm normally used to. I remembered about the wicked beastly looking car that is the Carson Annihilator Street Rod from the video game known as Burnout Paradise. It had the body fusion of a '72 Plymouth Road Runner and a '71 Dodge Charger, an exposed engine bay with a huge blower, street wheels and most of all - a Chinese dragon vinyl complimented with Sakura flowers and a full moon. Making this would require all the tools I have and that gave me the green light to go with making a replica of this unique hot rod.

To prepare the project, I was going to need: 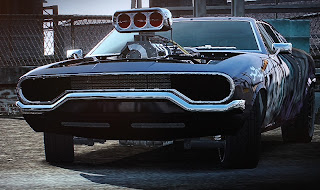 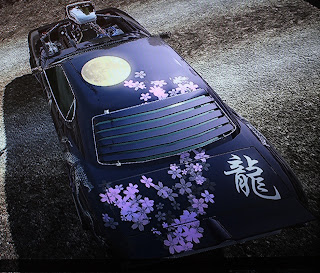 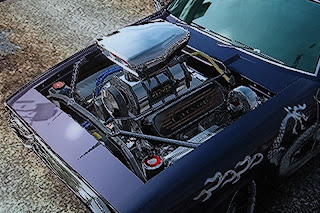 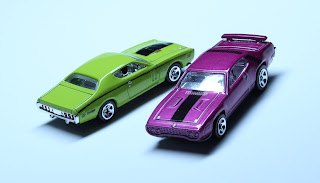 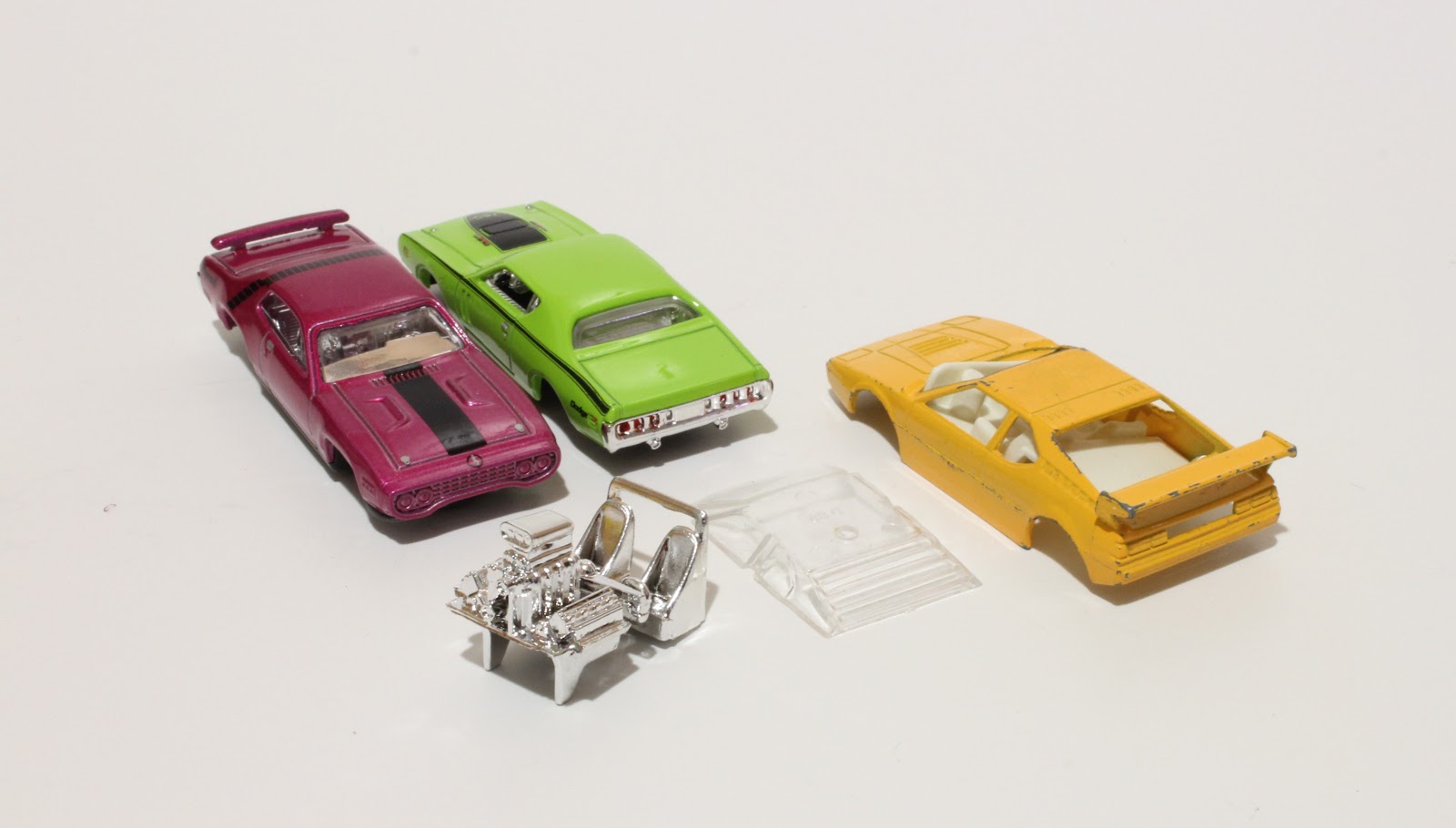 The rear window had shutters so I took similar windows off this BMW M1 casting (yellow car) found at a thrift shop. The engine was taken off a Morris Wagon. The closest wheels I could get to the Annihilator was the 10spoke wheels off Matchbox castings.

Now that I have all the required ingredients it was time to get busy. Before I do any of the hard work, the paint is stripped and the rear wing is cut off.

The very first thing I learned right away was that I didn't actually need to use the Charger casting.  I rechecked the tail of the Road Runner and it matched the Annihilator much better than the Charger. Though I was looking forward to joining two half bodies together, this saved me a lot of time. One of the biggest changes to be made was the  wheel arches. On the Road Runner, the fenders are cornered so the putty was brought out to make them round again. I also took this opportunity to shrink the rear arch so that I wouldn't need size 2 wheels in the back to match the original layout.

The bonnet was also cut off at this time, as well as the Dodge Charger's rear bumper: 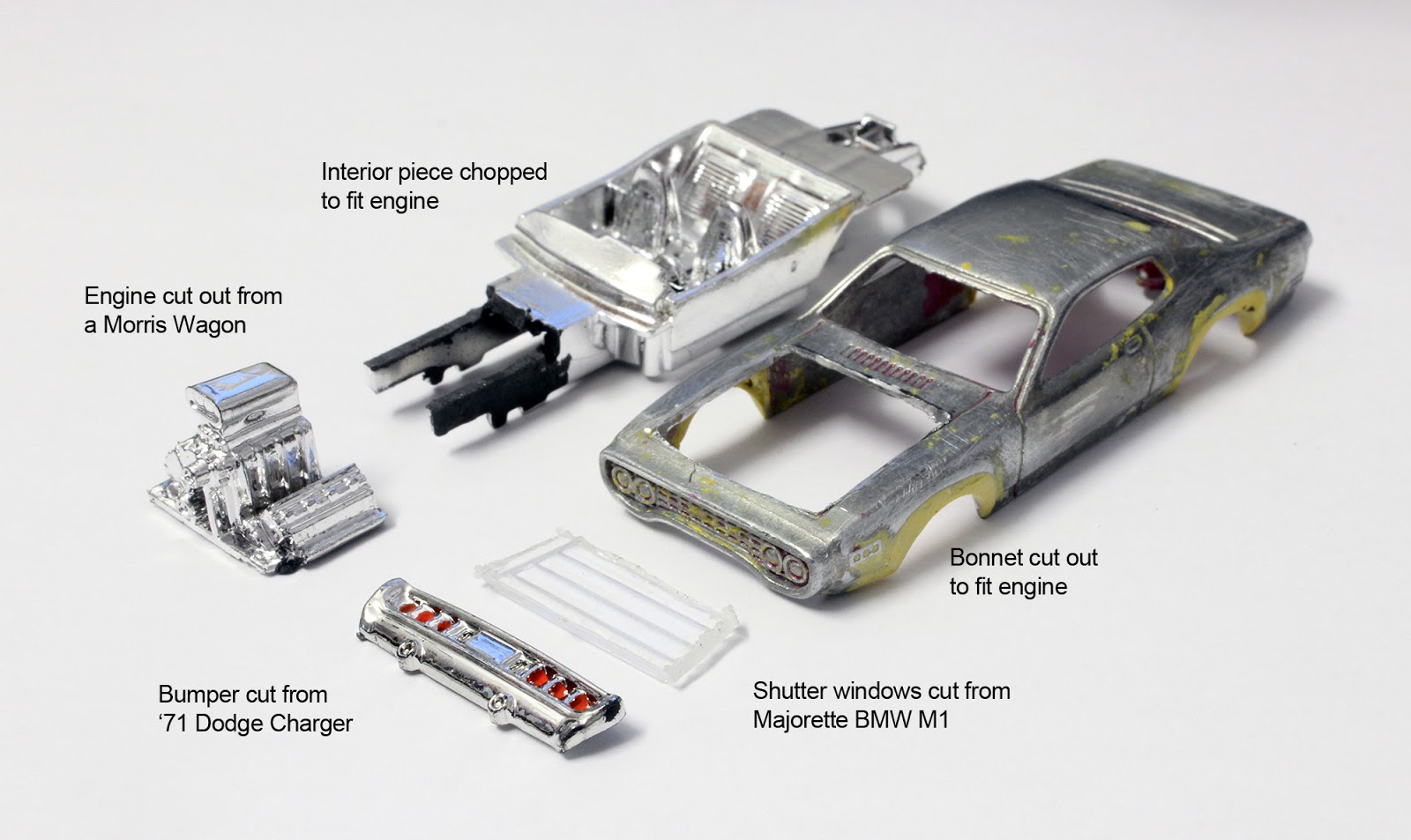 The rear end of the Road Runner was much too boxy. It seemed to be the only thing that didn't match with the Annihilator: 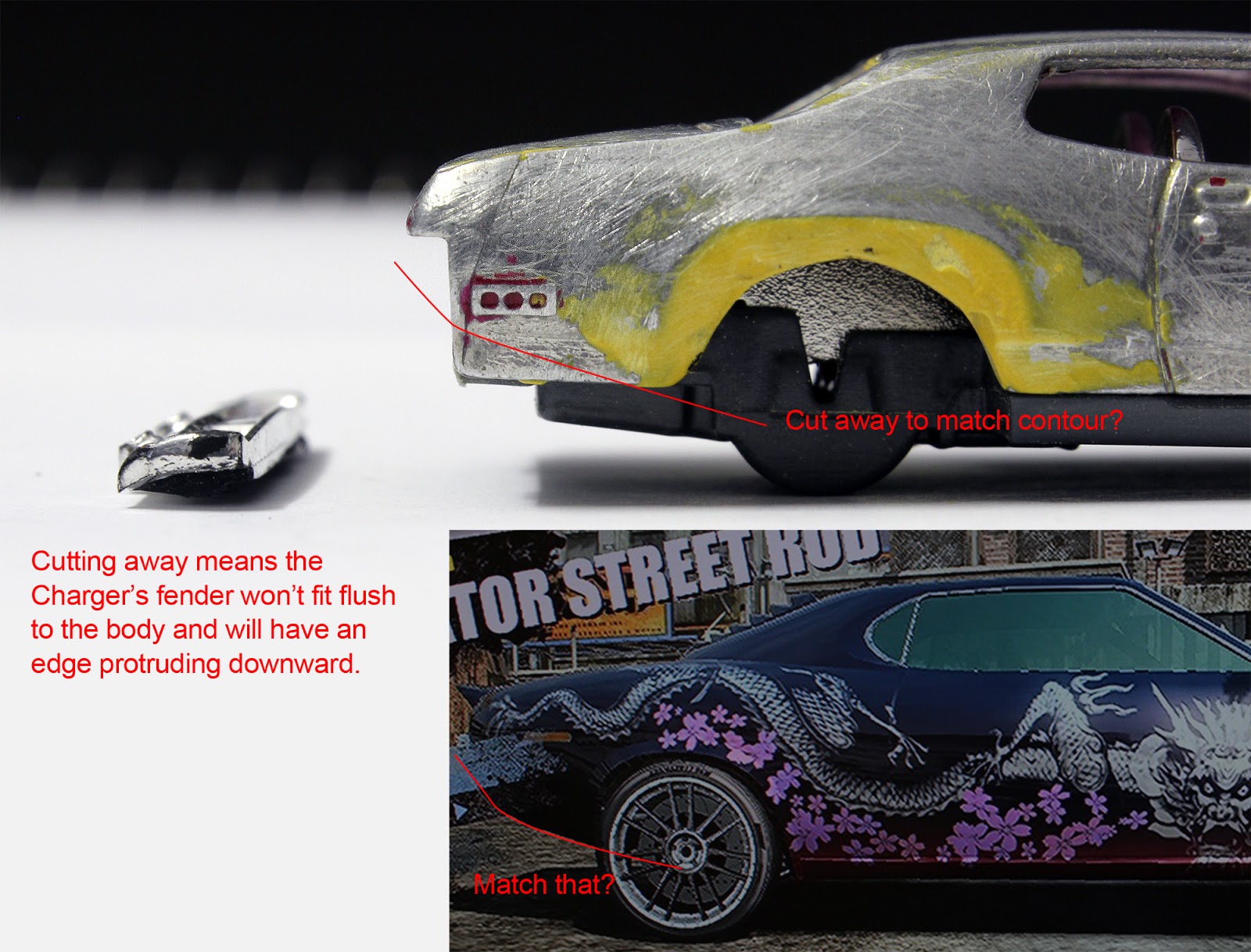 Decided to go through with it and shaved off a section on each fender. 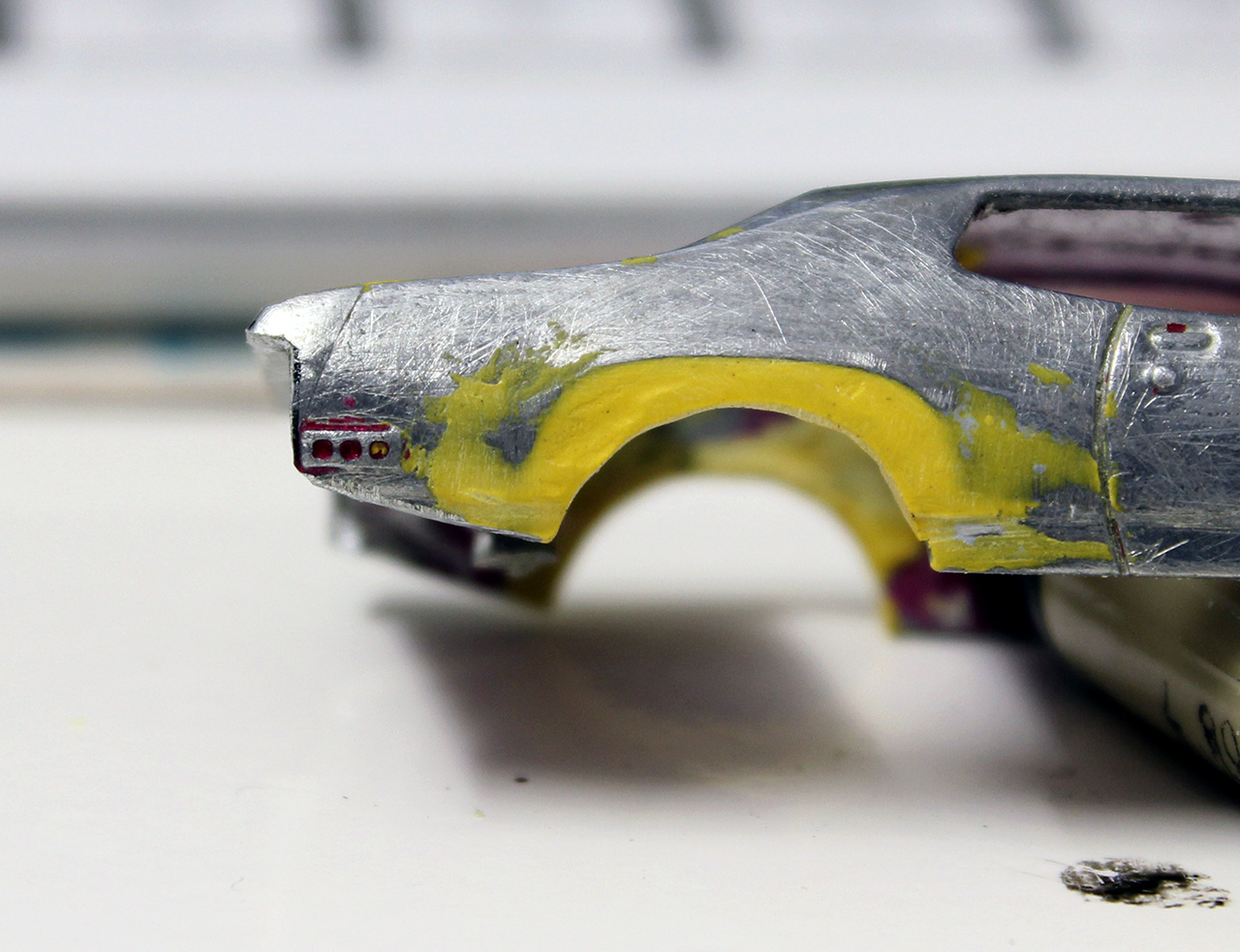 With the rear being reshaped, the chassis plate had to change as well. Put a few cuts into the piece, bent it up to match the slope, fasten and filled up the openings with putty. Brass tubing was also used to join the exhaust tips that are on the mold of the Charger's bumper to the rest of the car's underside. 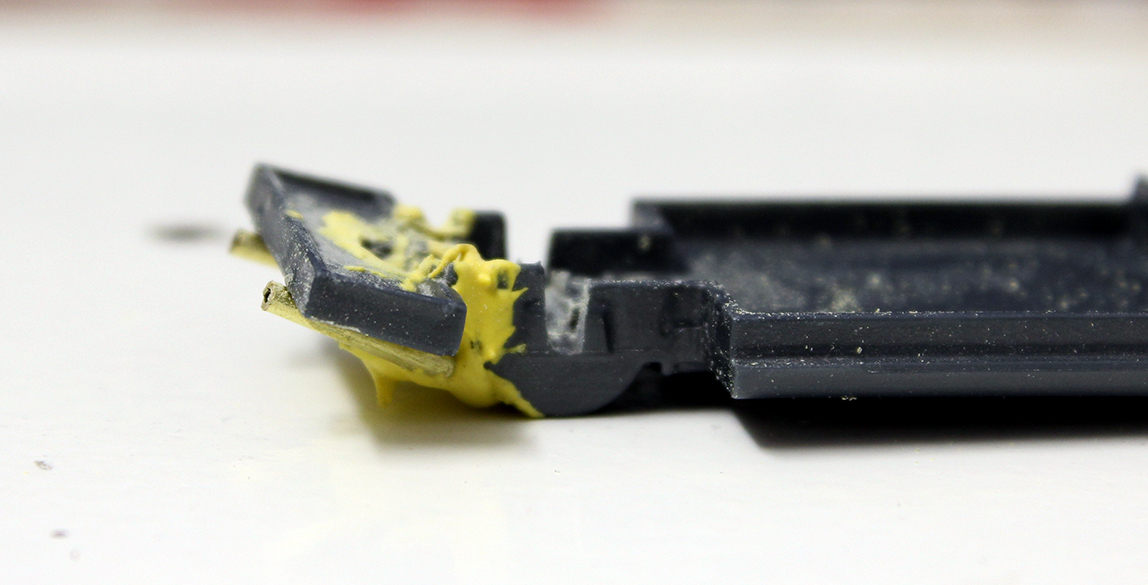 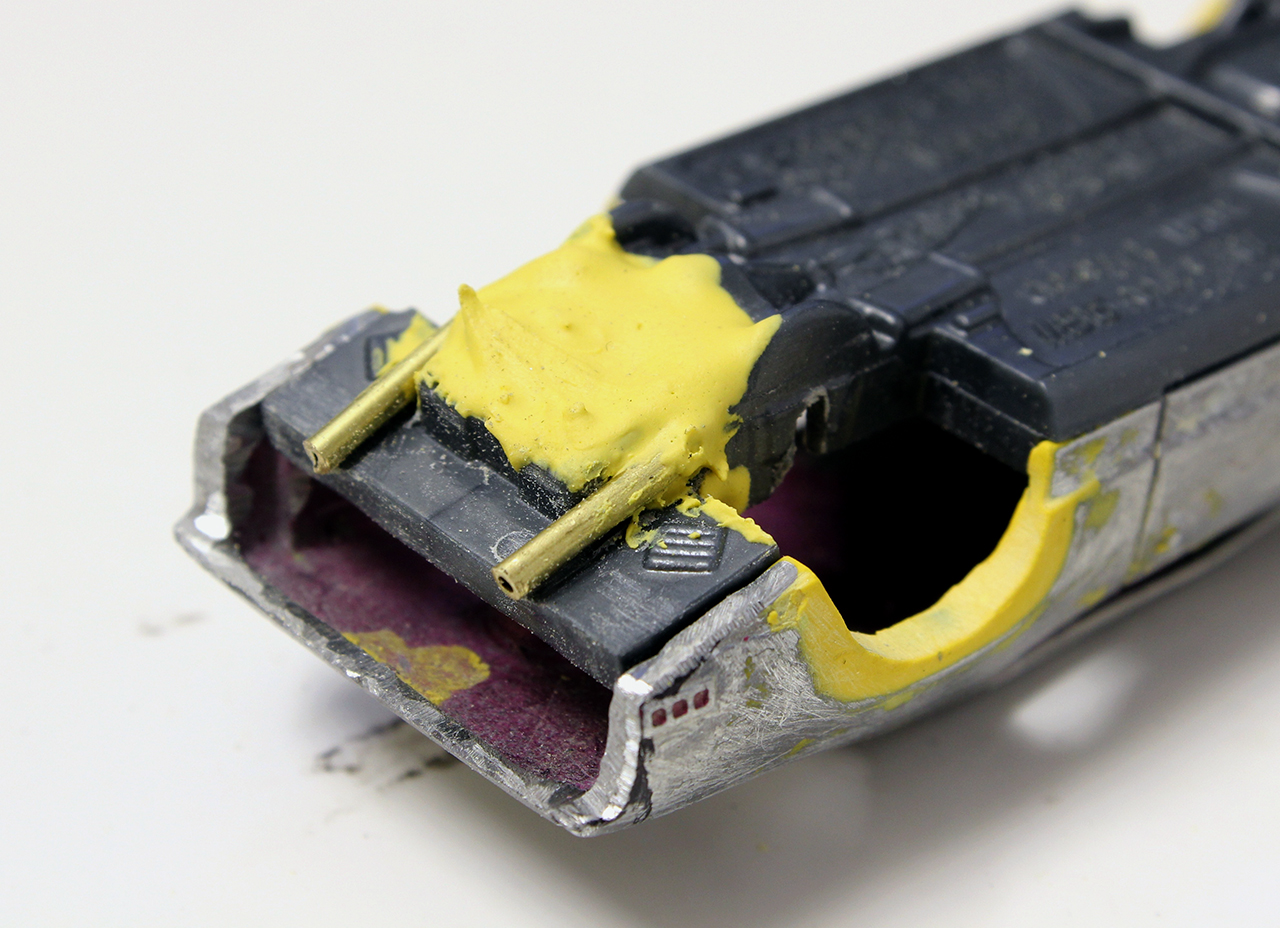 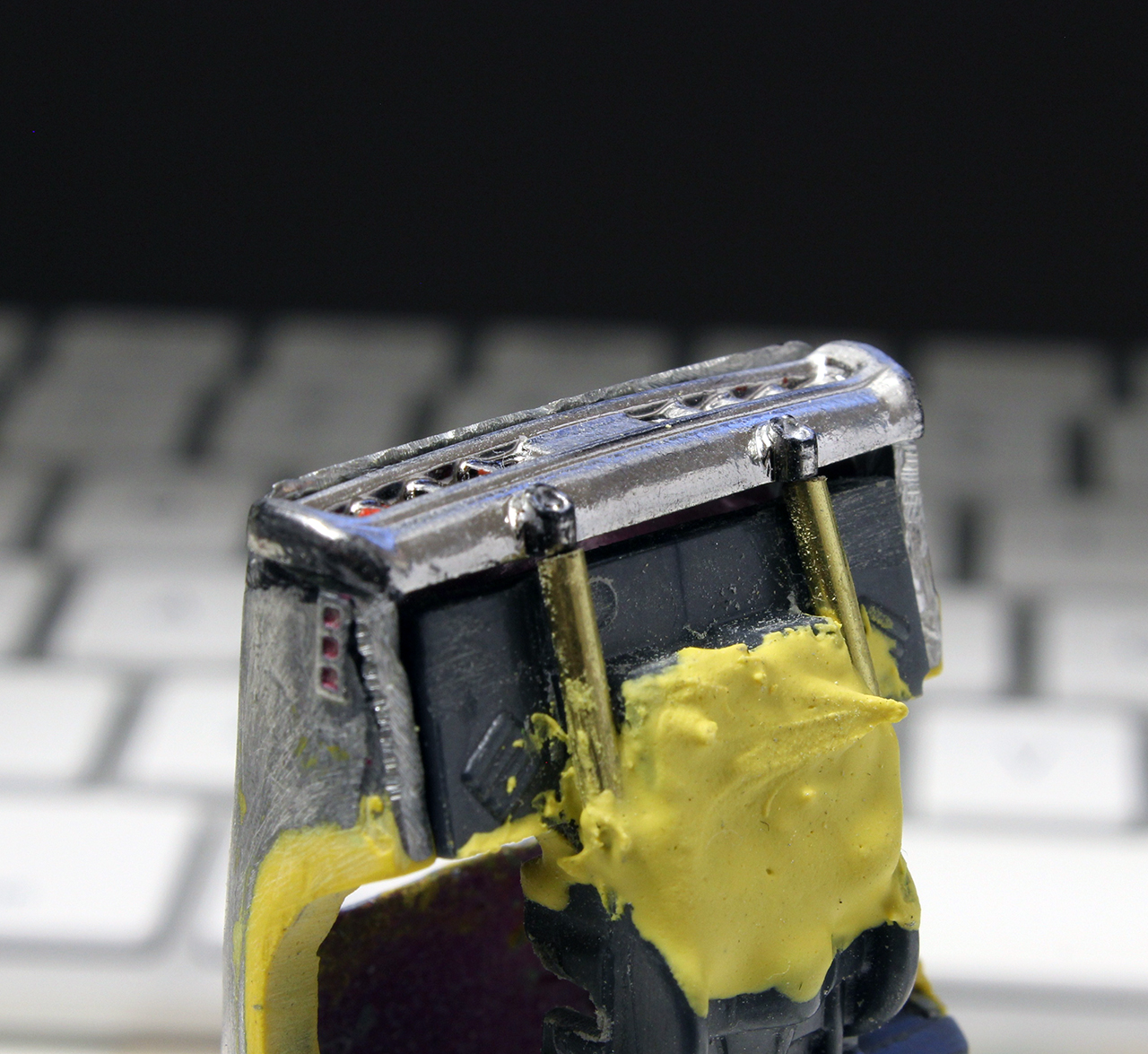 Although it wasn't photo-documented, the headlamps were removed via grinding since they aren't existence on the fantasy car.

Along with the bottom side being dealt with, the shutter windows were installed shortly after: 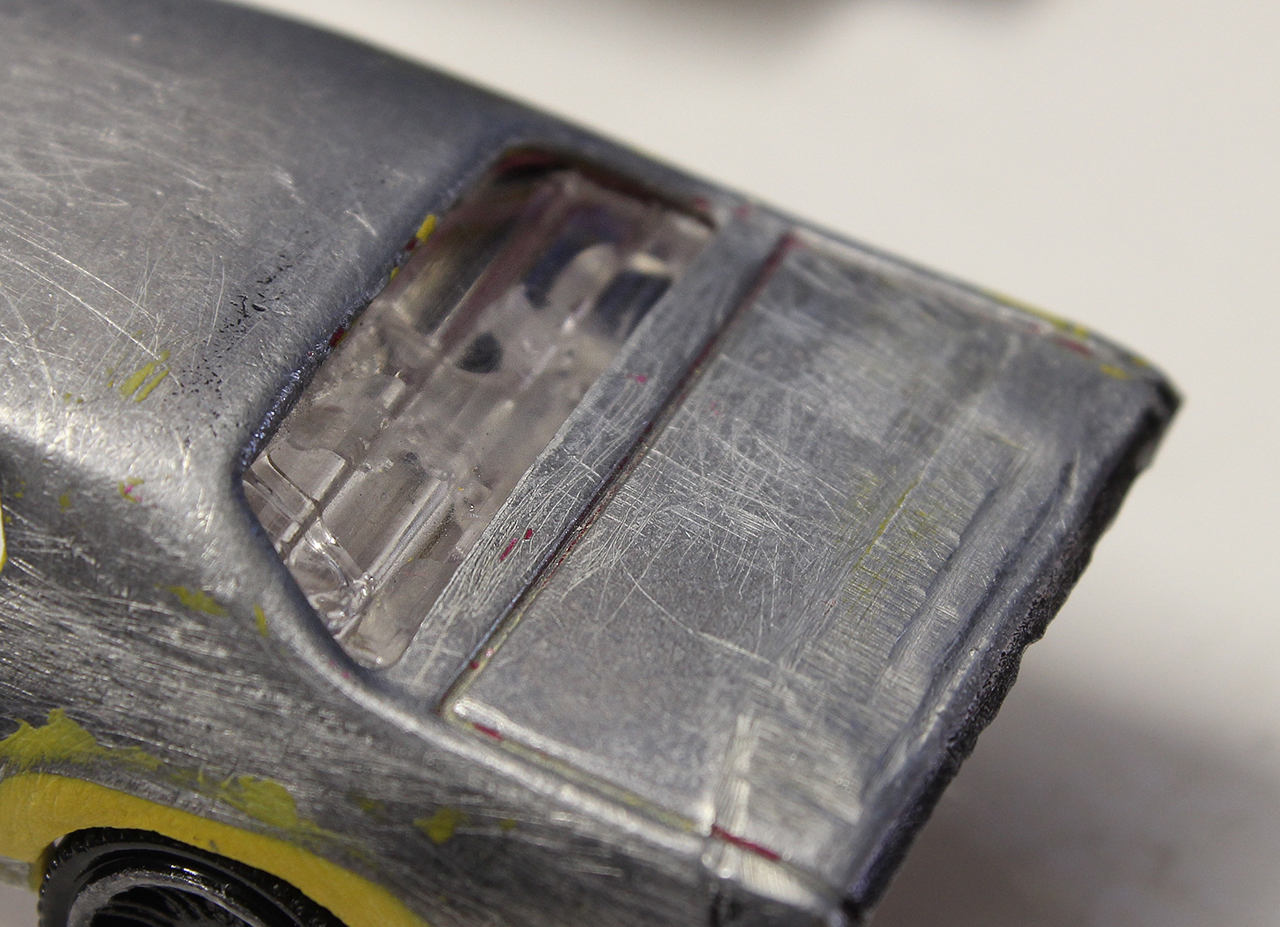 Since they're also the same colour as the car's body, I decided to permanently fix it to the body with a mix of hot glue and super glue.

Wheels were painted. First sanded off the chrome from the factory finish so a rough surface will allow better adhesion of ink and paint. The spokes were filled in with a black Sharpie's, while the rim was done with a toothpick and Testor's white enamel.

With all the body work done, it was time to lay down the paint. This project demanded high quality results. As such I used a can of Dupli-Color Enamels originally made for car touch-ups. It was going to be this colour I would have to match the background colour when printing the decals. 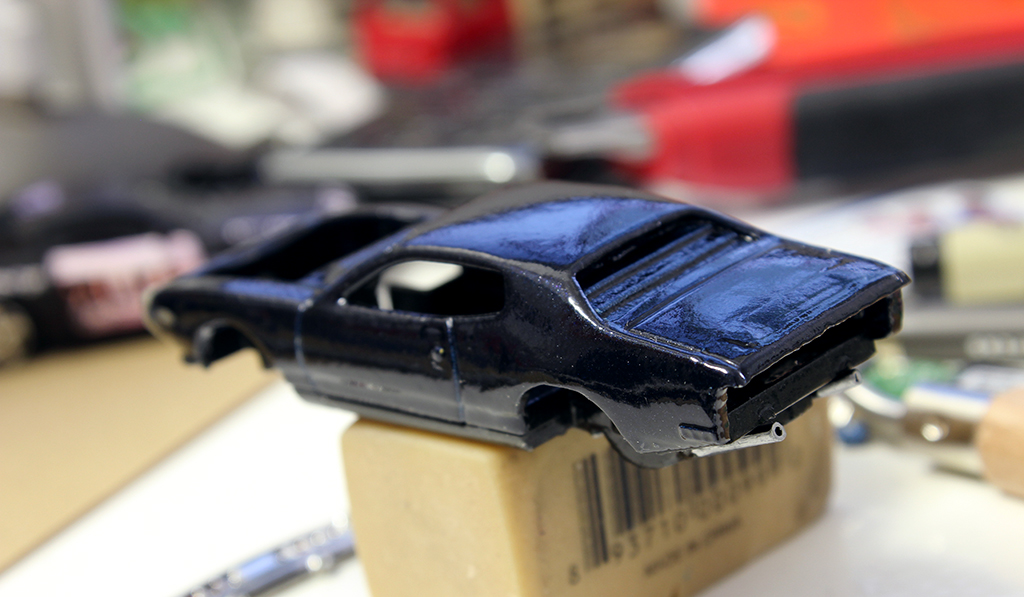 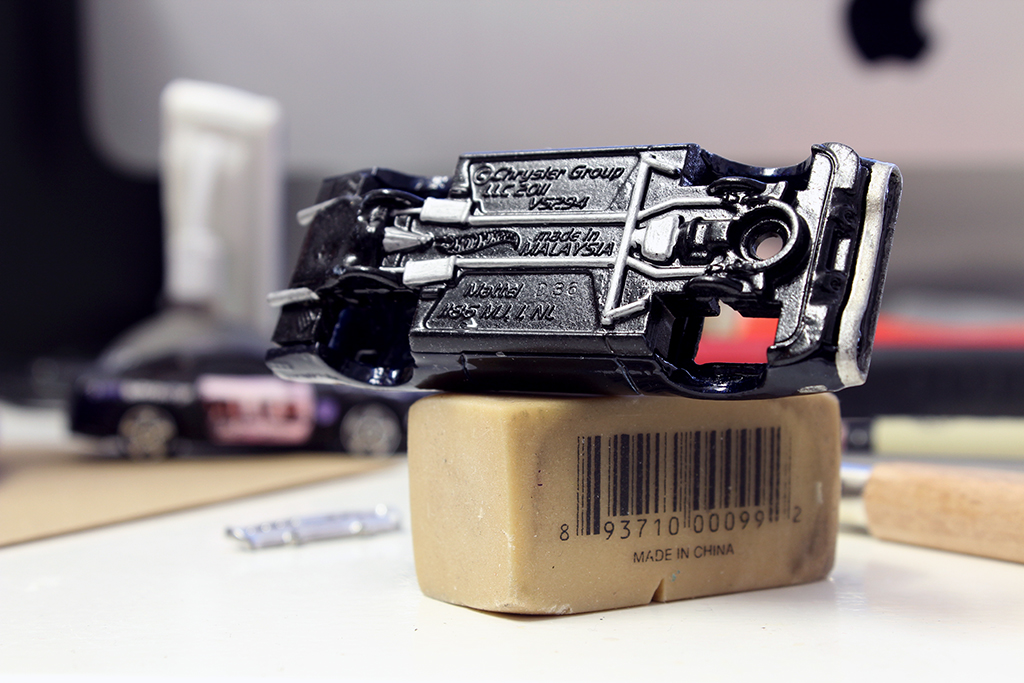 All the silver shown above are with the same Sharpie's metallic silver marker. I'm glad my buddy told me about this because now I use it to detail my customs quickly and hassle-free.

After a good day's work on Illustrator tracing photos I took of the TV (that's how I got those screenshots), through a few measurements and test prints, decals were finally produced: 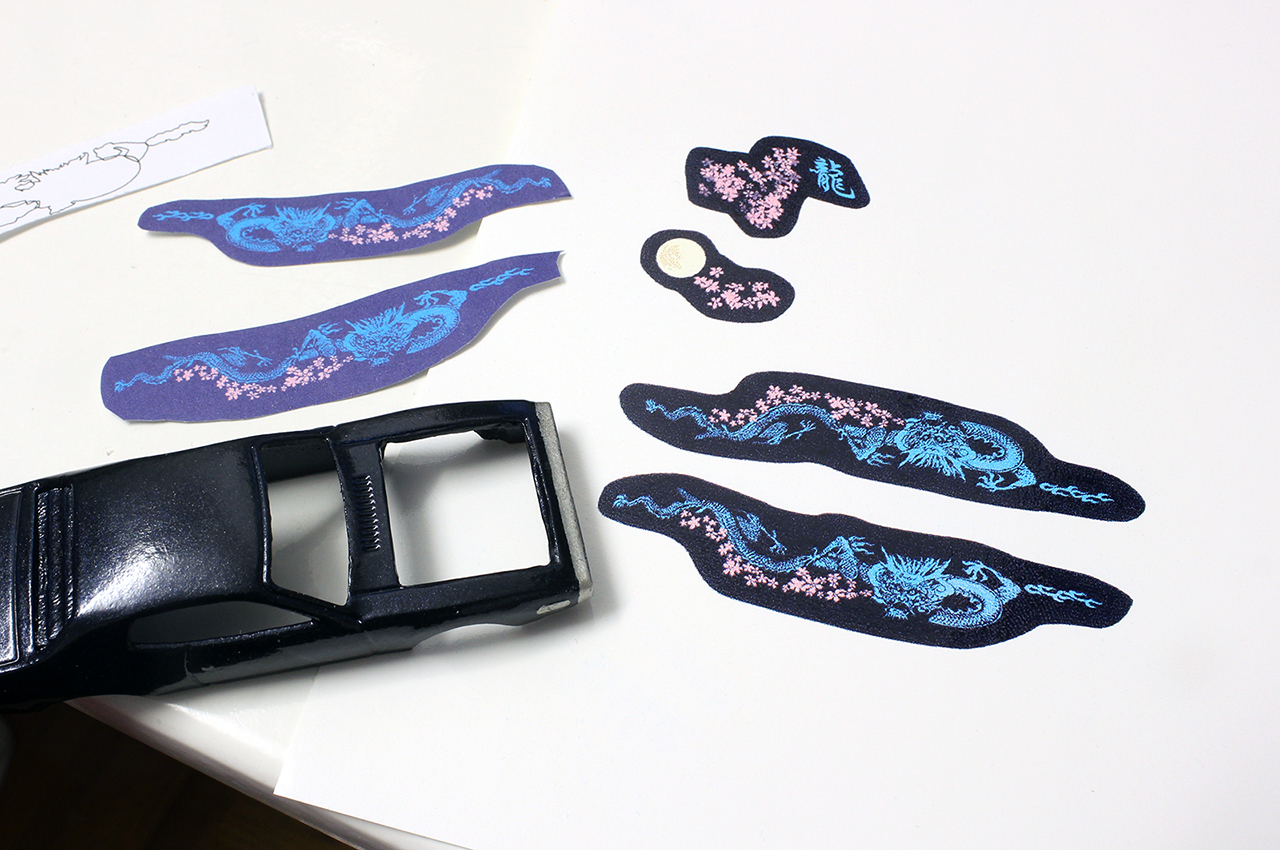 Here's where trouble came about. I learned that two layers of clear on the printed decals weren't enough. It may have been that or it was because the water I dipped the print in was too warm. What happened was that the ink on the edges started dissolving as I had it in the water leaving me with white edges everywhere.

I kept it anyway because I wanted to try touching it up with the enamel. Didn't work out too well. I ended up having bumps which then became dulled after I went at it with 250 grit wet-sandpaper in an attempt to eliminate it. Should've known; the more you learn. After that I tried masking off all the graphics and going at the entire body with a light shot of paint just to have a fresh coat of paint in hopes I would get a smooth even coat that wouldn't be too thick. That didn't work out either since the layer wasn't complete and left me with a textured surface which also wasn't glossy either. The more you learn! Now I was left with even more sanding to do.

Last thing to do now was to install the engine and all other components. Turns out I had to leave out the strut bar as there wasn't enough room to include it in the front. The tubes look great though. 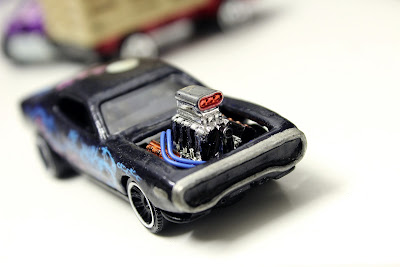 The red on the blower covers were filled in with a red Sharpie's as well as the orange on the engine blocks.

This was also the first time I tried out that baking soda trick with super glue and I was wowed at the chemical reaction. This was another tip provided from another friend who's also into the same hobby. What happens is that when super glue and baking soda come into contact, it dries very quickly and becomes a hard solid that's easy to sand. The axles were secured into place, as well as the chassis plate. 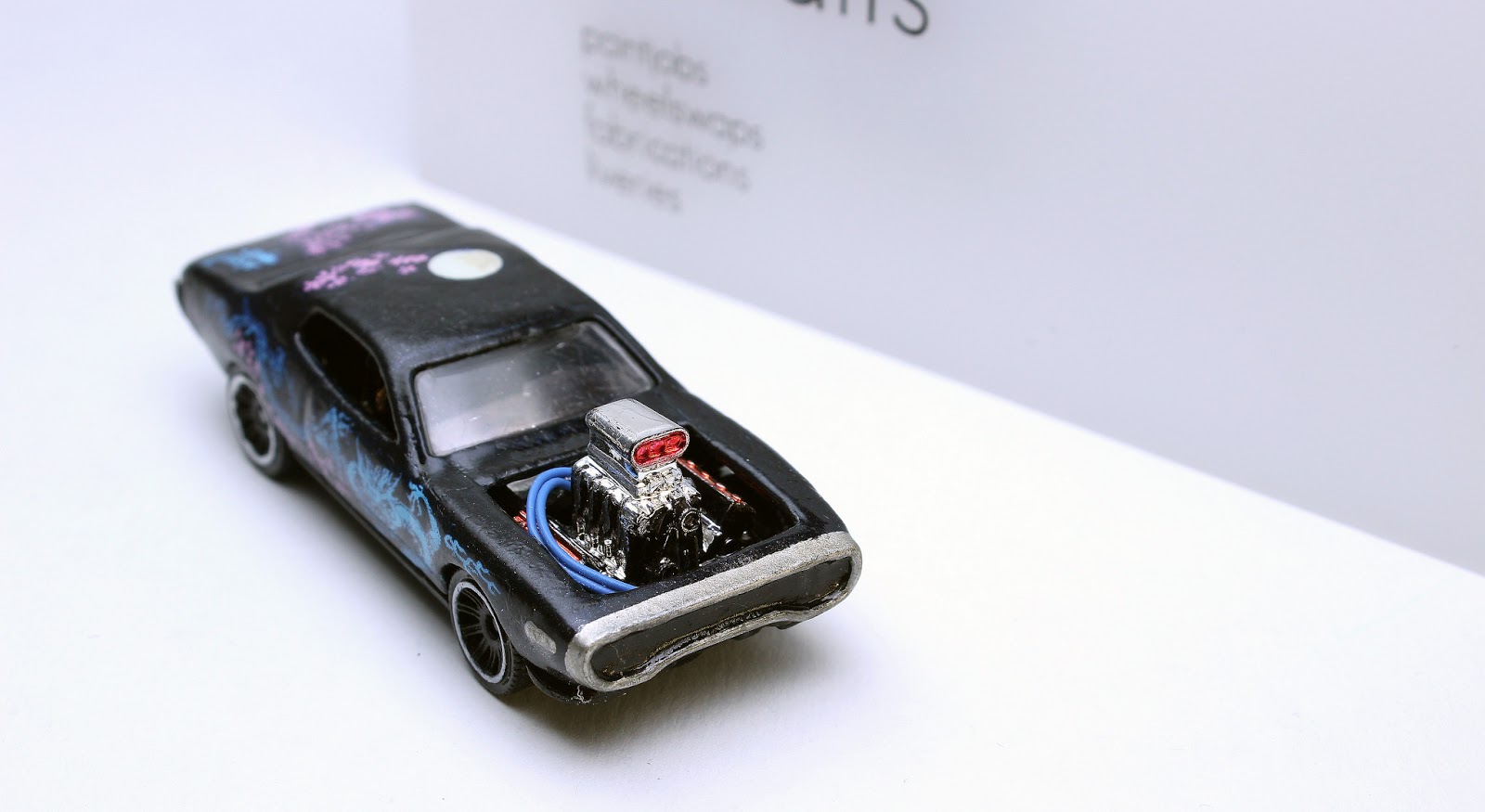 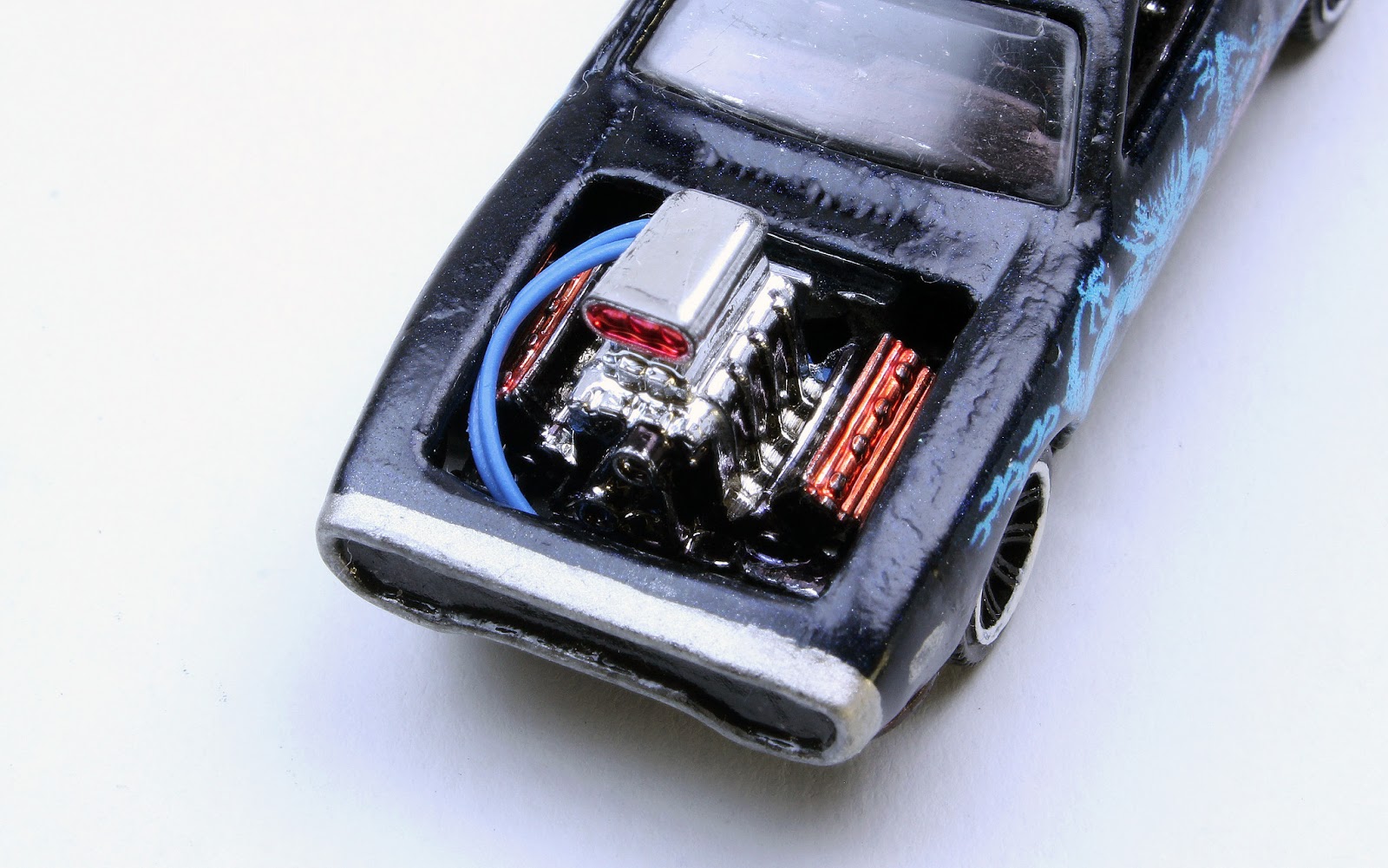 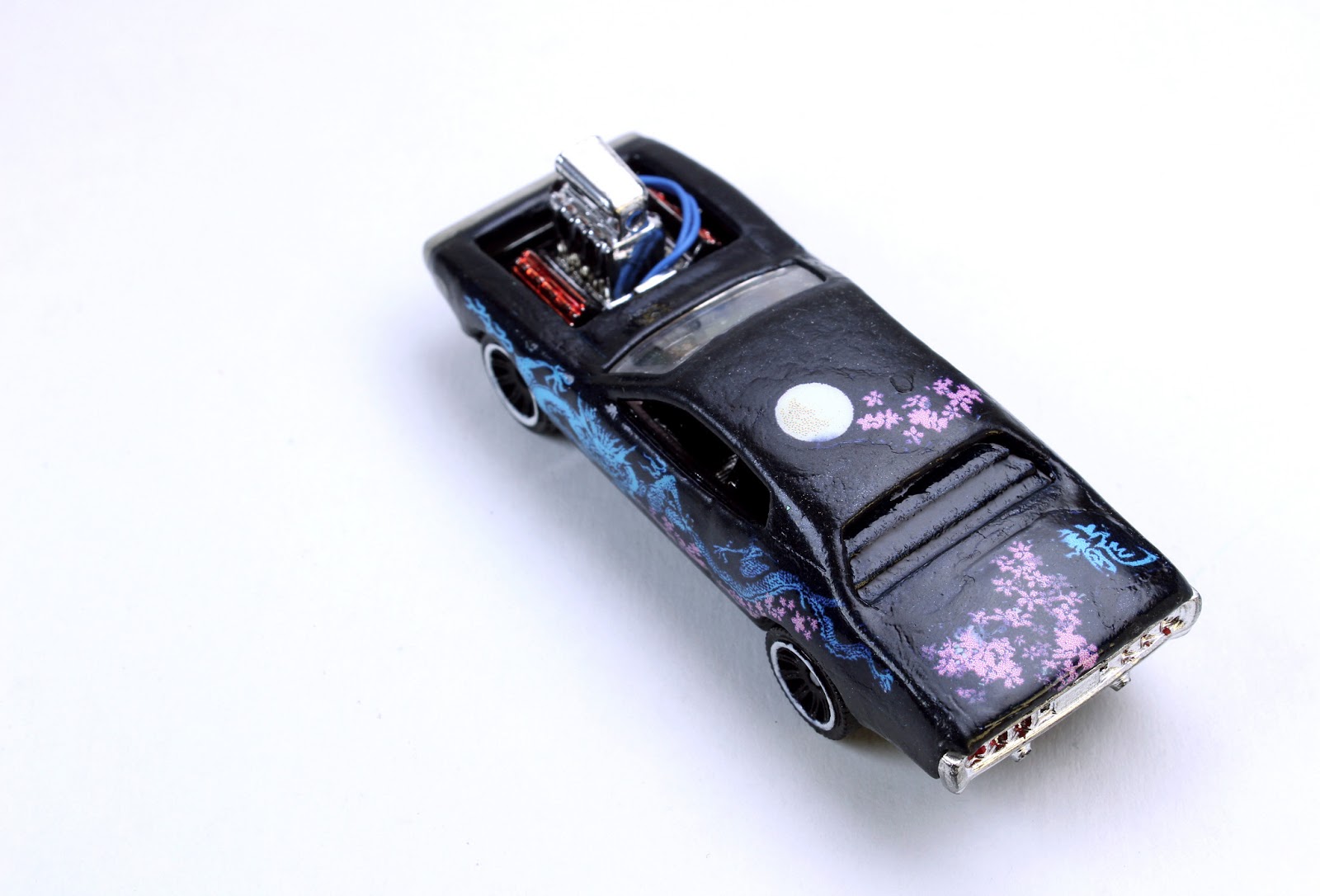 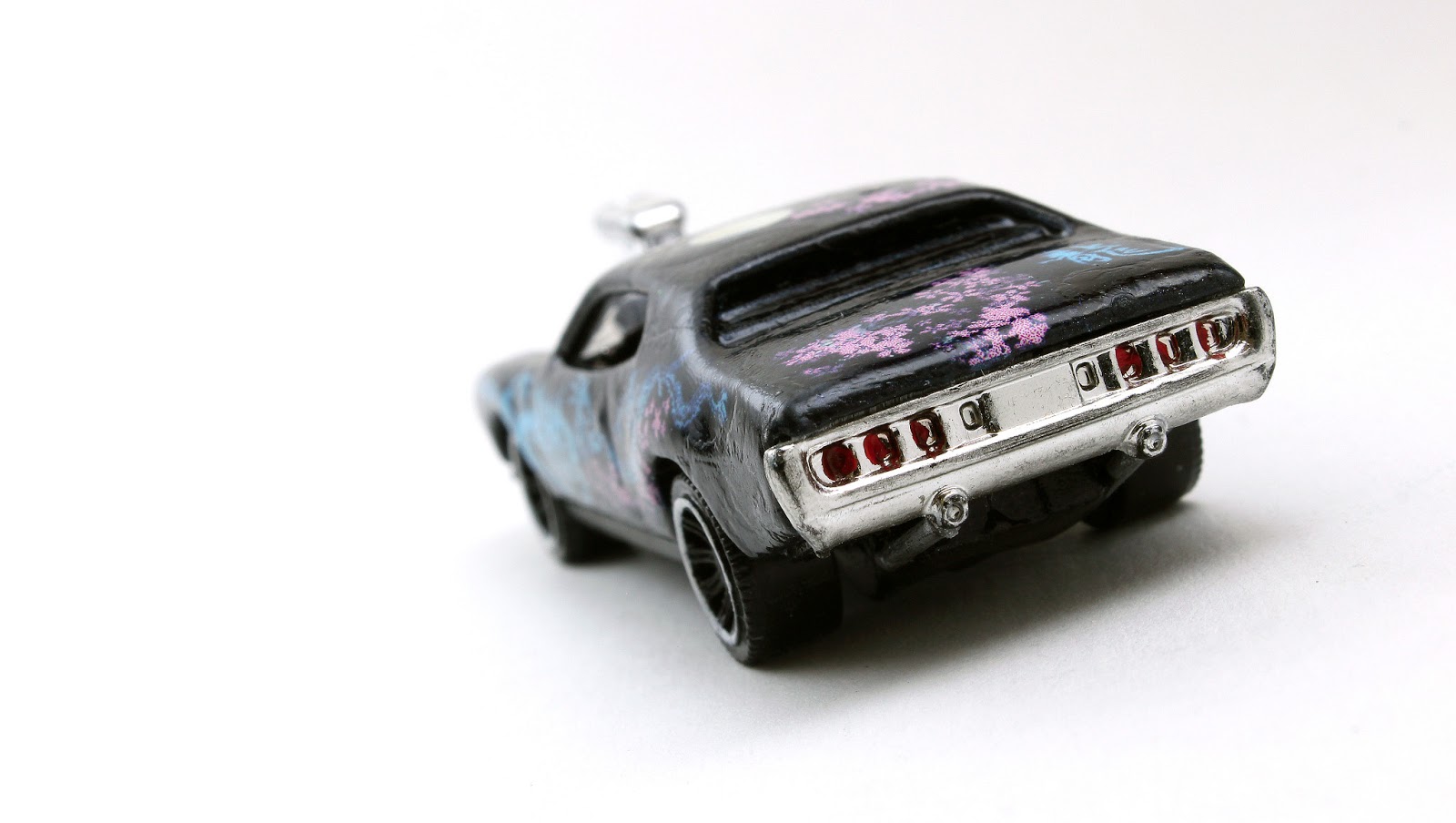 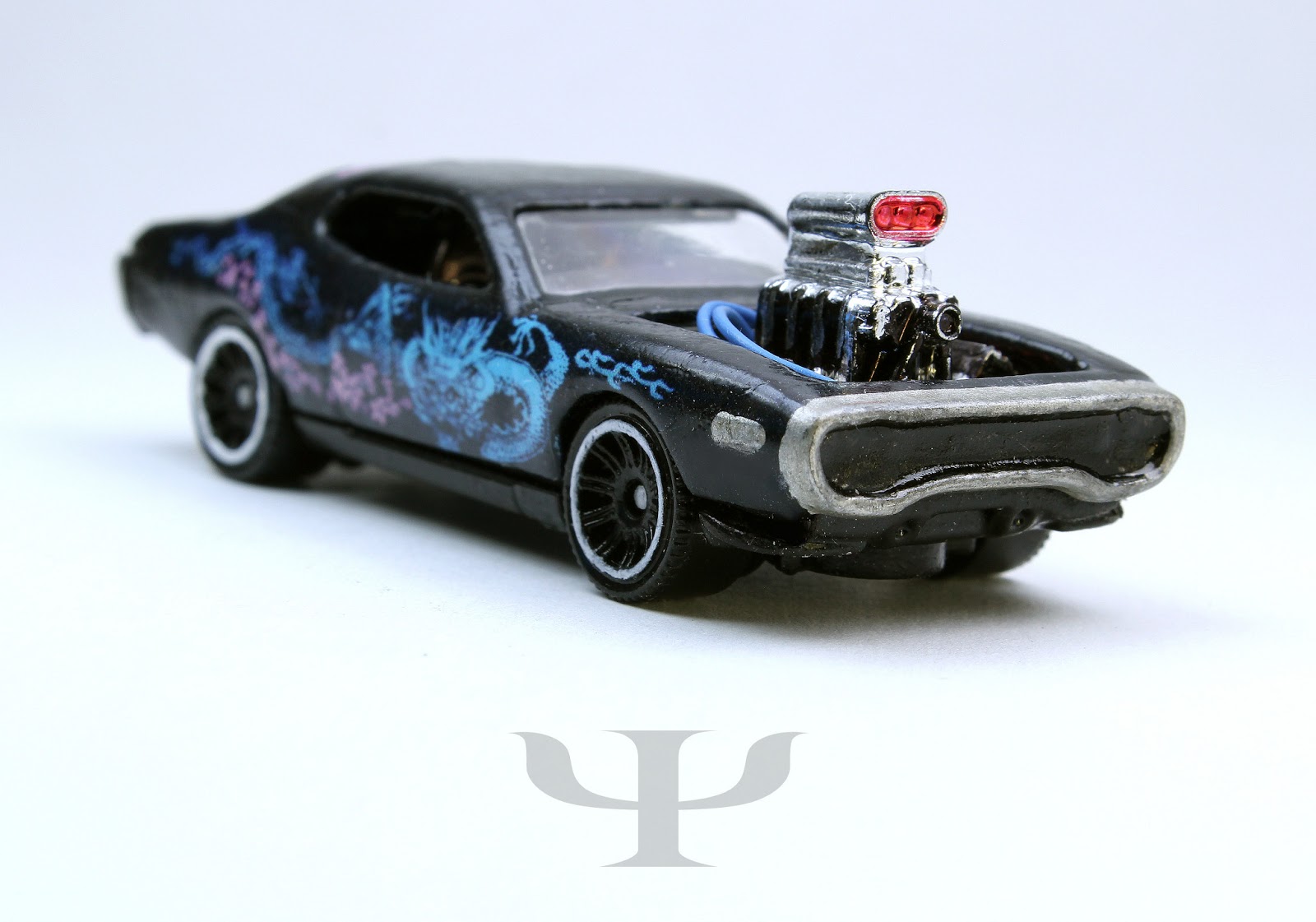 Next replica in line is the Hunter Camaro SS.